The End of an Era

You are here: Home / The End of an Era 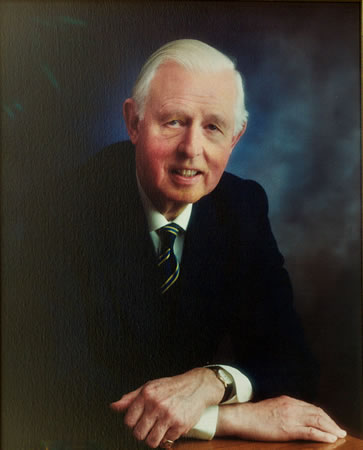 Richard joined JB Corrie after his national service in 1950 based at Corrie’s then headquarters, Victoria Street in London, a stone’s throw from Parliament Square. He was known as Mr Richard in the firm, and during his business life he witnessed tremendous change, not least in dress standards; when he commenced with the company he was expected to wear a suit and bowler hat to work.

The Company was founded by Richard’s grandfather in the late nineteenth century, and Richard became Managing Director of JB Corrie in February 1961 and Chairman in 1970. He was hugely respected in the company both for what he had done and the way he had done it. He always behaved with the utmost integrity, and was disappointed when others couldn’t or didn’t meet his high standards. He came from an era when business could be done on a handshake, when a person’s word was their bond, and felt it was a sad reflection of progress that business became so contractual.

In the early 1970’s he steered the company into a period of export driven growth. Four miles of dropper fencing for the Ministry of Wildlife In Kenya was followed by twenty kilometres of wildebeest-proof fencing for the Meru National Park.

An Ove Arup consulting engineer was admiring some Corrie deer fencing in Richmond Park, when he realised it would be ideally suited to withstand middle eastern sandstorms. He made contact with JBC’s and Richard spent the next ten years developing links with Saudi Arabia and the United Arab Emirates. There is no doubt that it was his calm, honest, trustworthy way of doing business that won contracts for hundreds of miles of fencing.

During his seventy year career within the fencing industry he served on several national bodies including the now defunct Society of Chain Link Manufacturers, who used to hold meetings at prestigious locations throughout the UK. He served on the board of The Fencing Contractors Association, including a period as Chairman of the Association, as well as a number of committees. He was always keen to drive standards higher and during his tenure with in the FCA in the 1980’s he was part of the team that drove the industry to adopt an approved Quality Assurance scheme (then BS5750), and lobbied Government agencies to make QA an integral part of British Standards, as well as any Government backed works.

He was a key player in the formation of the National Fencing Training Association in the 1990’s, moving the fencing industry away from the construction umbrella training organisation CITB. He served as the inaugural Chairman, trialing and introducing the first NVQ for fencing to the industry in 1994 with the first NVQ’s being awarded in 1995.

Success never went to his head. His priorities remained the long term future of the firm, which he strongly believed would be achieved by a quality driven approach, and the welfare of the staff. He continued to hate wastage and avoid extravagance – he took the garage salesman to task when his favourite Volvo failed to do the promised 200,000 miles.

Suffering with Parkinson’s disease later in life he bore his affliction with extraordinary fortitude, never complaining or moaning about his lot. He handed the Chairmanship of the firm over to eldest son John in 2009, but remained an active and engaged director of the firm right to the end; many a manager would be struggling with the answers when Richard rang to enquire how things were going. Board meetings were held at his house when coming to the office proved too much of a struggle.

Richard is survived by his wife Margaret, their three children and four grandchildren.